In direct contact with your favorite hotel.
Book without intermediation. 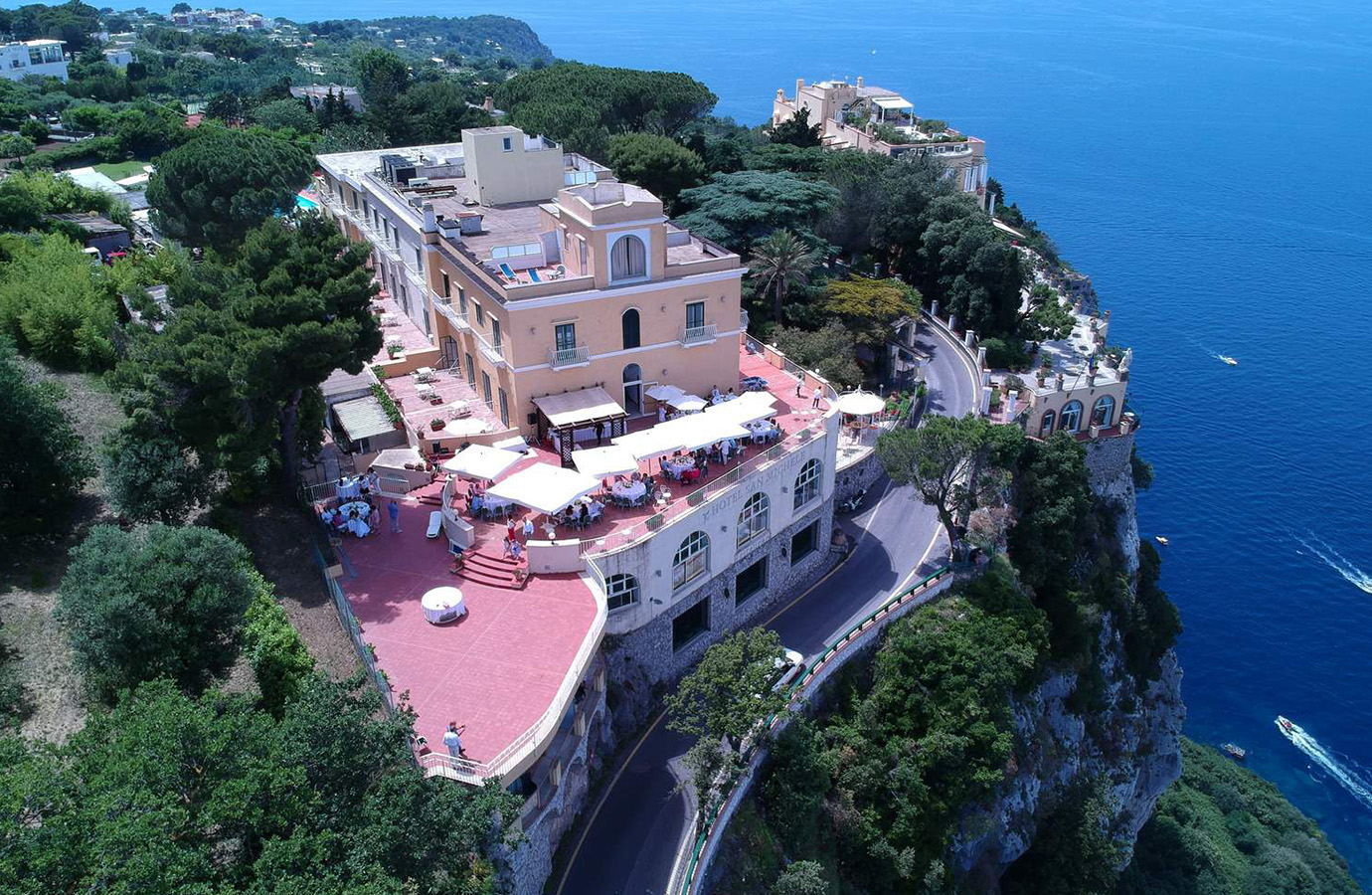 The garden, the pool, and a wonderful view. The hotel swimming pool, semi-Olympic, the largest on the island is at your disposal from 9:00 AM to sunset. The garden is one of the most well-tended and diverse on the island, and it will be a pleasure for you to relax in the midst of nature. And finally the panorama: a breathtaking view that you will remember for a lifetime.

Tranquility, relaxation, privacy: the Hotel San Michele will present you a real universe where you can do nothing. The days that will seem paused in eternal peace, fully immersed in the most beautiful landscapes of Anacapri.

The classic style of its rooms and the wide bright spaces emerging on the greenery of Mount Solaro or on the Gulf of Naples will be the perfect landscape to relax with a good book, recover your energy after a day of hiking and swimming, or let your children have a fun time in complete safety.

Finished in 1880, the hotel of that time represented one of the first hotel settlements on the island.

An elegant and comfortable hotel in a few years became a privileged destination for the nascent artistic and literary circle that revolved around the figure of the Swedish writer, Axel Munthe. Queen Victoria of Sweden and Kaiser Wilhelm I of Germany were the guests of those years.

The owner of the hotel, at that time, was the noble Sicilian family of the Marquises Salvo di Pietraganzili whose coat of arms still rises over the entrance door.

The Classic Sea View rooms are ideal for those who would like to enjoy the wonderful view of the Gulf of Naples from the Hotel San Michele. Elegant, furnished in traditional Capri style, they offer a restful atmosphere where you can spend pleasant moments of relaxation. Recently renovated bathrooms are equipped with a bath or a shower.

Double, triple and quadruple. The terrace or balcony overlooking the park and the pool distinguish the Comfort rooms, ideal for couples or families. Bright spaces are designed to relax in a fine fashion with tranquility. The renovated bathrooms have a bath or a shower.

With a terrace or balcony overlooking the picturesque landscape of Monte Solaro and Barbarossa Castle, the economy rooms of about 15m² are ideal for traveling couples. They will be your haven to relax and enjoy yourself in complete tranquility.

Double, triple and quadruple. The bright atmosphere of the antique furnishings and the luxurious curtains of our Superior rooms with a wide view to the Gulf will give you an exclusive space, where you can relax lulled by the sun and sea breeze, with your significant other or your family.

Our Deluxe rooms are the two most exclusive rooms in the Hotel San Michele. Large and recently fully renovated, with elegant and luxurious furnishing, such as the Versace bathrooms, they both have a magnificent panoramic terrace with a sea view and jacuzzi.

on the Gulf of Naples and the Sorrento Peninsula

close to all the major attractions of Capri

Where you can enjoy a relaxing day

No other Hotel in Anacapri has the privileged position like the Hotel San Michele: quiet and peaceful but very close to the town center, it is one of the few hotels on the island that can be reached directly by car. The Hotel is located 150 meters from the center of Anacapri which you can visit every day with our convenient Free Shuttle Service *, just 3 km from the Piazzetta and 6 km from the Port. From here, you can also quickly reach the historic Villa San Michele, the chairlift for Monte Solaro, the Grotta Azzurra and the Faro di Punta Carena, by a rental scooter or by bus, departing from right in front of the hotel.

Menu
Discover the most complete guide of capri

Guide of Capri © 2021. All rights reserved. Design by Power Up Capri